Unanticipated battery failures can happen in the middle of an ordinary day. It’s not a rare or unrelatable event. A perfectly running one can turn dead the next morning. As you might know, a car battery can either be repaired or replaced. But then, a repair can, at times, be out of the scope. Most batteries can last only up to a certain interval. 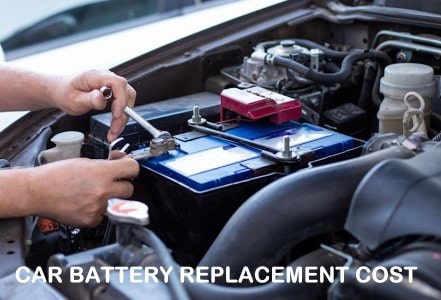 Of course, a suitable substitute can easily be found both online and offline. As far as the battery cost goes, it depends on several variables, such as the brand of battery you choose, the chain store that installs it, and the type of vehicle you own. In a nutshell, as with anything with cars, the cost depends on various factors.

When to Replace a Car Battery?

Predictably, most car batteries won’t last a lifetime. Normally, they tend to get less reliable with age. Depending on the car you own, you can expect battery issues around the three, four, or five-year mark. Luxury cars suck the life of the battery even faster because of the high demands they place on the battery. Factors like the climate can also affect the battery’s lifespan.

If you go to any local garage or auto car store, they will be able to check the battery’s health without removing it. Battery testers are available for this purpose. There are times when the battery will simply need a charge, saving you a major repair or battery replacement expense. For a basic charge, it won’t take more than a few hours.

What Are the Signs of a Dying Car Battery?

Ideally, you should start paying special attention to the battery’s health at the three-year mark to catch a battery problem at an early stage. This will prevent the battery from deteriorating further. To catch a battery issue, there are a few signs to look for, which are discussed below:

As the battery gets closer to its ending lifespan, you will notice that it will start affecting the engine light. The engine light won’t be as bright as before once the battery starts to slow down. It might even start flickering.

A slow start is another apparent signal of a failing battery. As the battery starts to wear out, it will affect other car components that are responsible for starting your car in a timely fashion.

Sometimes, a bad battery can cause leaks. If you open the hood, the car will smell like vomit. In such a scenario, you should get your car checked by a technician as soon as possible.

A battery can also crack. This normally happens due to extreme climate exposure, such as extreme heat or even extreme cold. In abnormal weather conditions, the battery can swell and crack.

A lot of oxidation or corrosion on the battery terminals is another solid indication of a dying battery. It usually means that the battery is nearing the end of its lifespan.

The good news is that most of the modern cars out there come equipped with a battery warning light, which tells you when to replace the old battery. Observing the light will help you with timely battery replacement.

A degrading battery can also be tested via a multimeter. If the multimeter reading shows less than 11 volts, it means that it’s time to get rid of the old battery.

How to Prevent a Battery from Dying Quickly?

For those who don’t know, the car battery stays charged from the energy it derives from driving. This should tell you that the battery can die a natural death from not being used for long periods. Even repeated short-distance driving won’t always work. Ideally, the driving distance must be long enough to allow the battery to recharge itself.

Finally, don’t use the headlights or any other electric-driven car component when the engine is off.

How to Change a Car Battery?

If it becomes clearer to you that your car can’t survive on a repaired battery, you will have to get a substitute battery. After all, running your car on a weak battery can shorten the life of other parts, such as your starter and alternator. If battery testing warrants a new battery, get a new one without fail. The tools needed for the purpose are as follows:

As you can tell, the tools needed for the job are pretty basic. Frankly speaking, it’s a beginner-friendly process. Due to the nature of the car issue, it demands urgency though to avoid being stranded. To fit the new car battery, here are the steps to be followed.

Generally speaking, the battery is located at a very prominent place in most vehicles. So, it won’t prove to be a task in hell to locate the battery. You can also take a quick look at the owner manual to find its location. Its usual place is under the hood (near the engine).

Now, the real work starts. So, position yourself comfortably in a safe environment. It’s important that you wear protective gloves and eyeglasses. Preferably, wear your old clothes. The car should also be parked on a stable and level surface, with the parking brakes applied.

To begin with, you will have to identify the ‘+’ and ‘-‘ cables. Starting with the ‘-‘ cable, disconnect the old battery. To do so, you will unscrew the negative terminal bolt and slide it out of the terminal. It’s a good idea to label the cable as positive or negative to easily identify it later.

You will unscrew the positive terminal in a similar fashion. You will have to remove all the nuts, screws, and bolts from the battery. Of course, place them at a secure place as they have a tendency of getting out of sight easily. Once all the screws and bolts are taken off, you will be able to dislodge the old battery from its location.

Important Note: Do not make the classic mistake of titling the used battery when removing it as this can result in acid leaks. The battery is also quite heavy. So, you will have to be careful while removing it from its place. The idea is to keep it upright at the time of removal.

To begin with, let’s make it clear that it’s easy to find new car parts these days. A replacement battery can be procured conveniently from any nearby auto parts store. You can also shop for it online. Here you can check how much car battery costs at Walmart. That said, you should know what you are looking for. We suggest looking at the car battery size chart for a perfect battery replacement. (more on the battery size chart later).

As expected, you will fit the new battery in the place of the old one. The crucial thing to remember, though, is to put the ‘+’ and ‘-‘ cables on the correct side. You will fit all the screws and bolts to hold the new battery in its place. Ultimately, you will connect the ‘+’ and ‘-‘ terminals and close the hood. Once done, you will fire the engine to test everything. The whole process shouldn’t take you more than an hour, even with lackluster mechanical skills.

For a responsible person, the job doesn’t end until the used battery is recycled. For those who don’t know, a car battery contains a lot of polluting elements, which can cause environmental harm. So, you will have to get rid of the old battery correctly. For recycling, you can either take it to a recycling center or the nearest auto parts store.

If the connectors are corroded, an extra step would be involved. You will have to clean them before installing the replacement battery. The good news is that there are wire brushes sold for this purpose. You can also use one of your old toothbrushes for the sake of cleaning. To prepare the cleaning solution, you can use a mixture of water and baking soda.

You will simply start scrubbing the corroded terminals with the old toothbrush or wire brush. If the corrosion is difficult to remove, keep dipping the brush in the prepared mixture. Keep in mind that the connectors have to be completely dry before you reconnect them. So, take the time out to dry the connectors before reconnection.

If you get the wrong-sized battery, the installation process will feel like a task in hell. Before you start researching for the cheapest available battery for your car, it’s a good idea to check the battery’s size chart to find a suitable replacement battery. From the size chart, you will know the exact length, width, and height (in both inches and millimeters), allowing you to choose the perfect replacement battery for your car.

You will normally find the group size printed somewhere on the top or side of the battery. You will also find it on the car manual. Generally, it’s a combination of numbers and letters. If you are not able to accurately determine the battery group size information, you can seek professional help. You can visit the nearest auto car store to seek help on this matter. An expert will usually be able to provide this information in a jiffy.

Keep in mind that the brand of battery matters a lot as well. Car batteries from certain well-known brands usually last a lot longer than batteries from unknown brands. Ultimately, it also depends on how much you are willing to spend on a battery. A battery from a lesser-known brand will be cheaper, but it won’t be as long-lasting as other batteries from reputed brands.

If you are planning to do the work yourself, you will have to pay only for the battery. The cost of the car battery varies from $50 to $200, depending on the amps, brand, and the car’s make and model. If you are hiring a professional for the job, the car expert will charge you $10 to $100 to install the new battery. Many auto shops do the installation for free, provided you purchase the battery for them. The profits are already baked into the cost of the item.

Car Battery Replacement Near Me

If you want to come across a nearby battery shop without throwing an arm and a leg, you can enter your location on the main page. Yes, you will get access to hundreds of auto repair facilities in a jiffy. Basically, you will be directed to the nearby car battery replacement store once you enter your zip code or address on the auto repair facility search locator.

Your car batteries provide the much-needed juice to keep the car running smoothly at all times. Seriously, it does a lot of heavy lifting. In fact, you won’t even be able to play the radio without a fully functional battery. If it can’t be recharged, it’s usually dead. So, it’s a good idea to keep an eye on the battery’s wellbeing so that you don’t get strangled anywhere out of the blue. Basically, battery pampering will help!